Titanfall 2 is a premium PC and console game with graphics that animate at a stable 60 frames per second (fps). The game also has a mobile companion, a real-time strategy title called Titanfall: Assault for iOS and Android, which sticks to the same design values and provides the almost the same frame rate -- but only for gamers who happen to own a recent iPhone.

On any Android device, even a top-of-the-range one like the Samsung Galaxy Note 8, Titanfall: Assault appears to have been deliberately capped at 30fps by its developer, meaning that Android users get a noticeably lower quality experience.

If you play on a cheaper or older Android device like the OnePlus 3T or Galaxy S6, the frame rate drops even further and is unable to maintain 30fps, resulting in GameBench awarding this experience a "Basic" badge on PocketGamer's recent review. Conversely, older iPhones like the iPhone 6 achieve 30fps without issue.

Why is this happening? A simple answer would be to blame the device. That excuse might fly with the OnePlus 3T, which is starting to show its age, but it doesn't with the Galaxy Note 8.

GameBench Reference Data shows that Samsung's latest phablet is a hugely powerful gaming device that is able deliver class-leading fluidity on games like Battle Bay and Vainglory. The Note 8 is just as capable as the iPhone 7 Plus on these titles, so there's no reason to expect it to struggle with Titanfall: Assault.

Another possible explanation is that Titanfall: Assault's developer capped the frame rate on the Note 8 in order to protect the Android user from excessive battery drain. But this doesn't add up either: the iPhone 7 Plus plays Titanfall: Assault at 57fps and consumes a heck of a lot of energy to achieve this -- almost 1,200mA, which equates to around 40 percent of battery drain per hour of gameplay.

By contrast, the Galaxy Note 8 burns just 600mA to play the game, equating to less than 20 percent of drain per hour, so it has battery capacity to spare. GameBench Reference Data for other games like Arena of Valor shows that the Note 8 tends to be just as power efficient as the iPhone 7 Plus, if not slightly more so.

A difference in display resolution?

Another argument could be resolution: the Note 8 has a higher-res display than the iPhone 7 Plus, so it theoretically might need to work harder to render visuals. On inspection, however, this isn't happening: Titanfall: Assault doesn't exploit the Note 8's native resolution on default settings and actually seems to be more pixelated on this phone than on the iPhone (see the screenshots below, with 300 percent zoom sections to magnify the level of detail on the grunt soldiers). 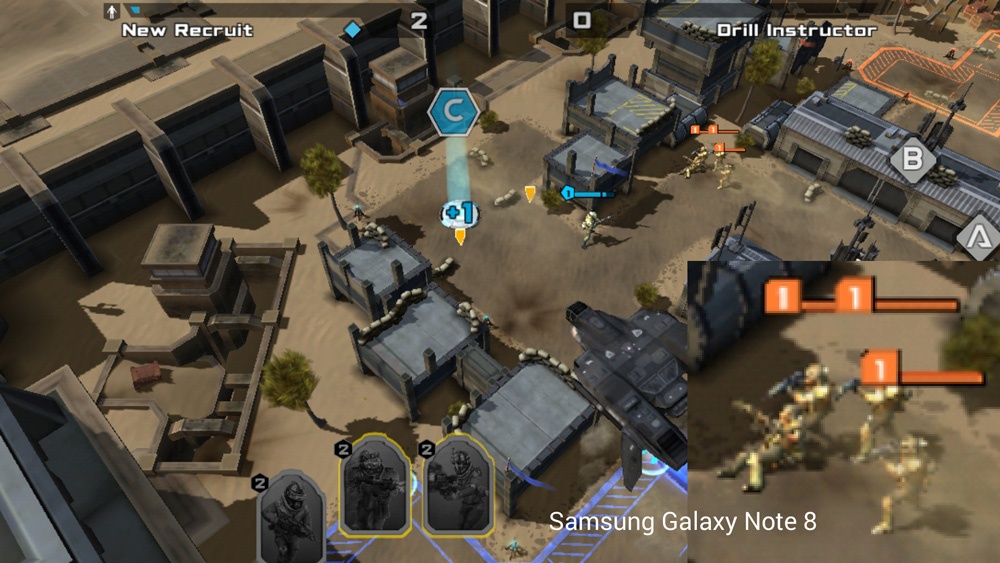 All of which leaves us with the likelihood that this problem revolves around software optimisation more than raw hardware capabilities. It's possible that Titanfall: Assault's developer, Particle City, accidentally overlooked the possibility of uncapping the the game's frame rate on stronger Android hardware like the Note 8. (Or maybe they accidentally uncapped the frame rate on the iPhone 7 Plus.)

It's also possible that they tried to uncap the frame rate on high-end Android devices, but encountered issues like stutters or overheating as a result of inefficiencies in display drivers, graphics APIs, the Unity game engine or other factors. We've asked Particle City for clarification on this, and shared our Reference Data with them, and we'll update this article if we hear back.

(Update, October 12th, 2017: We've heard back from Particle City that a new build of the game is in the works which will unlock certain graphics options for Android users, including the option to unlock a better frame rate on devices that can manage it. This would be a welcome step forward, so long as the unlocked frame rate is as high and as stable as on the iPhone. We'll re-benchmark the game when the new build lands, which should hopefully be within a month.)

Whatever the explanation, it doesn't alter the impact on Android gamers: they're spending the same amount of money on hardware as their iOS counterparts, but they're getting half the visual fluidity on certain high-profile games. There's nothing unfamiliar about this, unfortunately, but it's surprising that it's still happening in 2017, given that the issue of Android game optimisation has been raised so many times, by so many people (including us) over the past three years.