GameBench reveals the difference between real Candy Crush and rip-offs

What you won’t find, however, is many instances of these King games delivering bad performance or excessive battery drain. On the whole, GameBench's reference data suggest that Candy Crush game are some of the best-optimised in the market. The data also show that one of the top "Copy Crush" games, which tries to imitate King's game design, is significantly less optimised.

Top marks, and not just on top devices

Candy Crush Saga wins the GameBench “Ultra” badge for graphical performance across a very wide range of OS versions and hardware models, including not only familiar Samsung devices but also low- and mid-range phones from the likes of Xiaomi, Oppo and Motorola.

This diversity is important because it helps us to predict that the game is likely to run at 60fps on hundreds more devices that have similar specs to those already represented in the GameBench Data Platform. This prediction is further supported by additional crowdsourced test sessions from thousands of GameBench users that suggest that Candy Crush Saga is just as smooth on at least 80 additional handsets. These crowdsourced sessions aren't yet published on the Data Platform, but they're steadily being verified and added so that we can reflect a sizeable portion of Android hardware.

The GameBench Ultra badge means that Candy Crush Saga is able to animate at 60 frames per second (fps), which is the maximum visual fluidity offered by today’s smartphones. What’s more, GameBench's battery badges show that the game delivers this graphical smoothness while also providing solid battery life of at least three hours. That's a significant achievement.

By no means is Candy Crush Saga perfect on every device we've tested. The Xiaomi Mi 4i and Lenovo A6000 deliver a bad user experience due graphical instability and excessive power consumption respectively. But these devices run many other games badly too, from many different genres and studios. With Candy Crush Saga at least, these devices are exceptions to the rule.

Here's a snapshot of sessions from our data platform -- you can see more by going to data.gamebench.net: 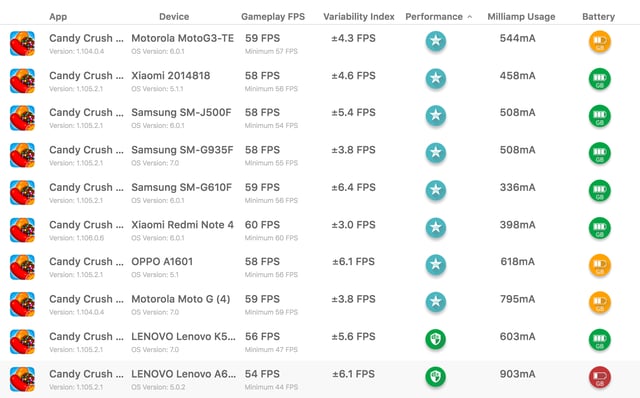 GameBench's Reference Data tool reveals something else of interest: Candy Crush rip-offs on the Play Store tend to fall short of King’s quality standards. Copycat studios are clearly able to mimic King’s game design to some degree, but they seem unable to copy King's optimisation and user experience.

Cookie Crush, shown on the right in the image above, is one of the more popular "copy crush" games, with over 10 million downloads. This title tries to achieve the same 60fps smoothness as the real thing, but it tends to show prolonged frame rate stutters below 55fps (and often very far below, as revealed by the "Minimum FPS" readings in Reference Data snapshot below). These stutters prevent Cookie Crush from achieving an Ultra badge on all but a couple of Samsung devices. Compared to Candy Crush Saga, this game also uses ten percent more battery on average (632mA vs. 566ma).

Anyone who's played an authentic Candy Crush game will know that a huge part of the allure is the immersive atmosphere it creates through a combination of visuals and sound effects. Stable and high frame rates are critical to this atmosphere, because they allow candies to pop and burst in a way that feels almost-real, almost-physical, almost-edible.

Equally, part of the reason Candy Crush games have spread to such a vast audience is that people tend to see others popping candies on their phones while out and about. This viral effect would surely have been dented if the games were battery hogs, such that it became more risky to try to play them during the morning commute.

Through investment in optimisation and quality assurance (something one of King's senior QA people spoke about at a recent GameBench event), King has managed to deliver the right mix of graphics and power efficiency across a wide range of hardware. Although by no means the only factor in its success, this has undoubtedly played a role in protecting the company's competitive advantage. As a byproduct, King has also set a benchmark for others to follow -- and it looks like some studios simply can't.

Would you like to explore GameBench's Reference Data for yourself?