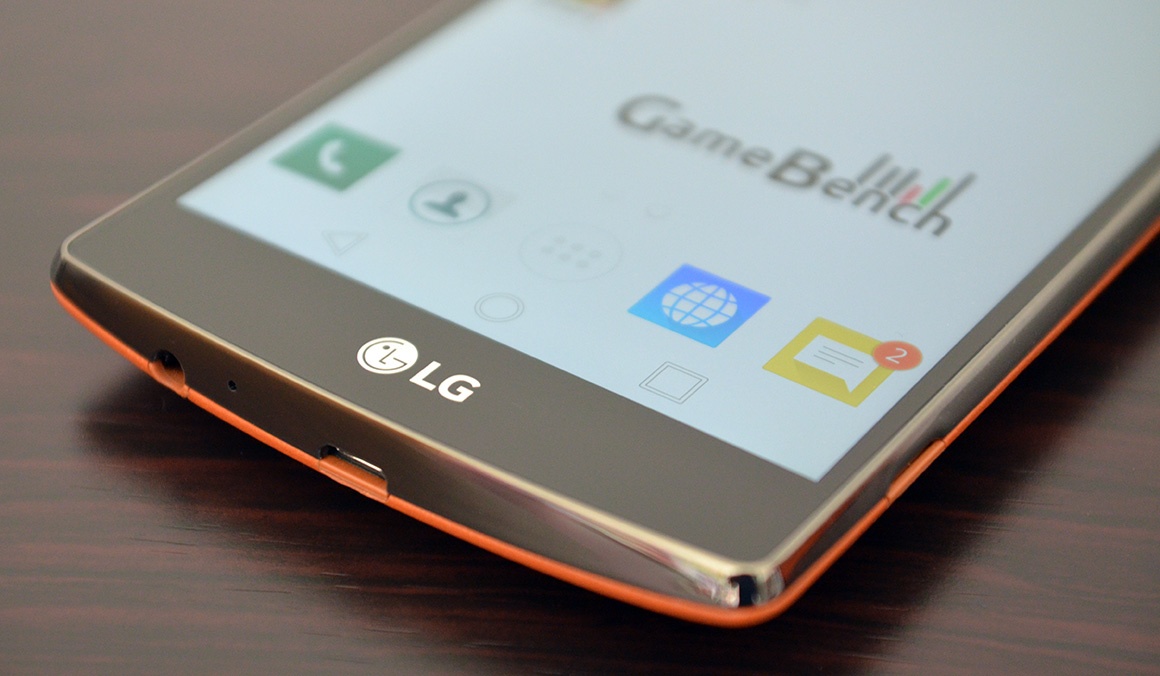 Before we get to the charts, we should mention that we don’t necessarily buy into the whole Snapdragon 810 overheating rumor. The HTC One M9 device in our lab hasn’t shown any strange behaviour, and it’s actually proven to be a great gaming device -- even though its frame rates aren’t always the highest. Qualcomm itself has flatly denied there’s any problem, and we just haven’t seen any evidence hard enough to make us doubt the company's word.

We’re also not swallowing the idea that the Snapdragon 808 is a last-minute cut-down of the Snapdragon 810, with two cores stripped out to reduce heat generation. We’re more inclined to believe LG’s own explanation that it has worked with Qualcomm for a long time on this chip in order to create something that deliberately puts greater emphasis on the balance between battery and performance, rather than just pure grunt. This underlying philosophy is evident in the LG’s menus and settings, which include a “game optimizer” mode that is meant to improve battery life during gaming -- something we’ll get to in a bit.

The upshot is that we think the LG G4 should be considered on its own merits -- as a whole device, rather than as a jumble of components. Moreover, the performance ranking we’ll provide here is just one aspect of the phone and we’d be the first to admit that this ranking is actually just half of the performance equation: We should also be looking at battery life. We’re currently working on a way to standardise battery consumption measurements across Android and iOS in order to allow this, and we hope to publish this data soon.

As usual, let’s start with our “average of averages” representing overall performance across our basket of ten popular real-world games. For each device in the chart, and for each of our ten games, we have used GameBench to measure the median frame rate, minimum frame rate and frame-rate stability during a 15-minute gaming session. We’ve then used the geometric mean of these measurements to create the three top-level charts shown below.

(Please read up on our methodology in our previous report, Battle of the Sixes, and our iPhone 6 Plus addendum, if you’d like to know more about how we arrive at our figures.)

Based on our primary metric, median frame rate, the LG G4 comes bottom in our ranking. It falls 10 percent short of the Samsung Galaxy S6, even though the GS6 has just as many pixels to push on its 1440p display. The G4 even falls short of the Motorola Nexus 6 -- another 1440p device which is considerably older, containing last year’s Snapdragon 805 chipset.

Factoring in our secondary metrics, minimum frame rate and stability, we can say that the LG G4 handles our test games satisfactorily, staying at 33fps without many or prolonged slowdowns. However, when slowdowns do happen, they tend to be severe: 22fps on average, which is worse than the other phones and more likely to be noticeable to the gamer either in the form of jerkiness or lagginess.

The averages can only tell us so much, and indeed they can mask very poor or very good performance in specific games. It pays to look more closely in case these happen games happen to titles that you love -- or in genres that you tend to play most.

Our top racing title, Asphalt 8, plays exactly as the averages above would have us predict. The LG G4 maintains a steady 29fps, beating the Nexus 6, but suffers relative to the other phones due to a poor minimum frame rate of 21fps. This is a game where the HTC One M9 shines, so here we have a possible example of where the LG G4’s processor does represent a step down versus the Snapdragon 810. However, we should never just assume that observed differences are due to hardware rather than software optimisation.

Here the LG G4 makes a surprising leap up to the second spot in the chart. However, this gain is quite superficial in the sense that it relies purely on median frame rate, while the minimum frame rate and stability are quite poor -- just 20fps and 61% respectively. Good performance should arguably consist of high median and high stability, and if you take this approach then the iPhones probably deserve the top two spots in the table.

Here’s another set of results that matches our expectations, based on the overall pattern of the LG G4’s behaviour. Nothing much to report here, except that it’s interesting to see that the Snapragon 810 and 808 devices in this chart are neck and neck. This again warns us of the importance of considering software optimisation rather than just focusing on hardware. After all, the HTC One M9 has more cores (eight vs. six) and fewer pixels to push (1080p vs. 1440p) in a game that actually renders at the screen resolution (not all games do), and yet it shows no performance advantage over the G4, proving that CPU and GPU hardware cannot be the main cause of observed performance differences in this game.

Another “on trend” result, in which the LG G4 is let down by a very poor minimum frame rate.

We know from our in-depth screenshot analysis that Modern Combat 5 is a game that renders at the full 1440p resolution on devices that support it. And although the LG G4 technically does support this resolution, it pays too a high price in terms of performance, with a median frame rate that is below the 30fps threshold (at 28fps) and a scarily low minimum frame rate of just 17fps. This leaves us wondering whether the LG G4’s processing power is out of step with its screen resolution -- at least for this sort of graphically intensive first-person shooter.

This is an extremely well optimised game that runs great on all our test devices, and the LG G4 is no exception. In fact, the LG G4 plays this game at almost 60fps, delivering slightly superior performance to the lower-res and supposedly higher-specced HTC One M9. Again, this must be due to software optimisation.

Ouch. This is a game which stresses most devices to their limits, especially when resolution is pushed beyond 1080p as it is with the LG G4. The phone buckles under the pressure, delivering a jerky median frame rate of 22fps, a very low minimum of 12fps and the lowest stability score of all the devices (68 percent).

This game doesn’t try to render at the LG G4’s maximum 1440p resolution, and perhaps as a result it performs much better, showing no shortfall against the HTC One M9 or the Galaxy S6.

This is another well-optimised game that tends to perform well across different platforms and devices. It runs just fine on the LG G4.

Another consistently performant game, which generally runs at 60fps -- but alas, not on the LG G4. For some reason, after around 10 minutes of gameplay when we reached Chapter 5, the median frame rate dropped considerably and we observed a minimum frame rate as low as 36fps. It’s possible that this was due to throttling, as it was around the 10-minute point that battery temperature reached it maximum (34 degrees C) and plateaued.

As already mentioned, it’s possible that LG has consciously accepted a performance hit with the LG G4 in order to prioritise battery life. This is consistent with the emphasis on battery efficiency that is found within the phone’s menu screens, including a “game optimizer” option.

PhoneArena has noticed that enabling this option reduces observed image quality during gaming. We're not sure that this applies to every game though, as we compared screenshots from Dead Trigger 2 (a graphically intensive title that renders at the full-fat 1440p on compatible phones) and couldn't discern any difference, even when zooming into a specific detail. (See the screenshots and zooms below.)

More to the point, we haven't so far found any clear evidence that the “Game Optimizer” mode significantly effects battery consumption in Dead Trigger 2. Admittedly, our battery methodology is currently quite broad-brush, especially because we extrapolate hourly drain from a 15-minute test. But even bearing this in mind, we were surprised to see that battery drain was around 31 percent per hour regardless of whether the Game Optimizer setting was switched on or off. (Frame rates were also identical in each test.) We're not saying the setting is useless, since we've only looked at its impact on DT2 and a few games in our sample, but we need some more clarification from the manufacturer about how the setting is supposed to work. We've shared our results with LG and will update this article if and when we hear back. 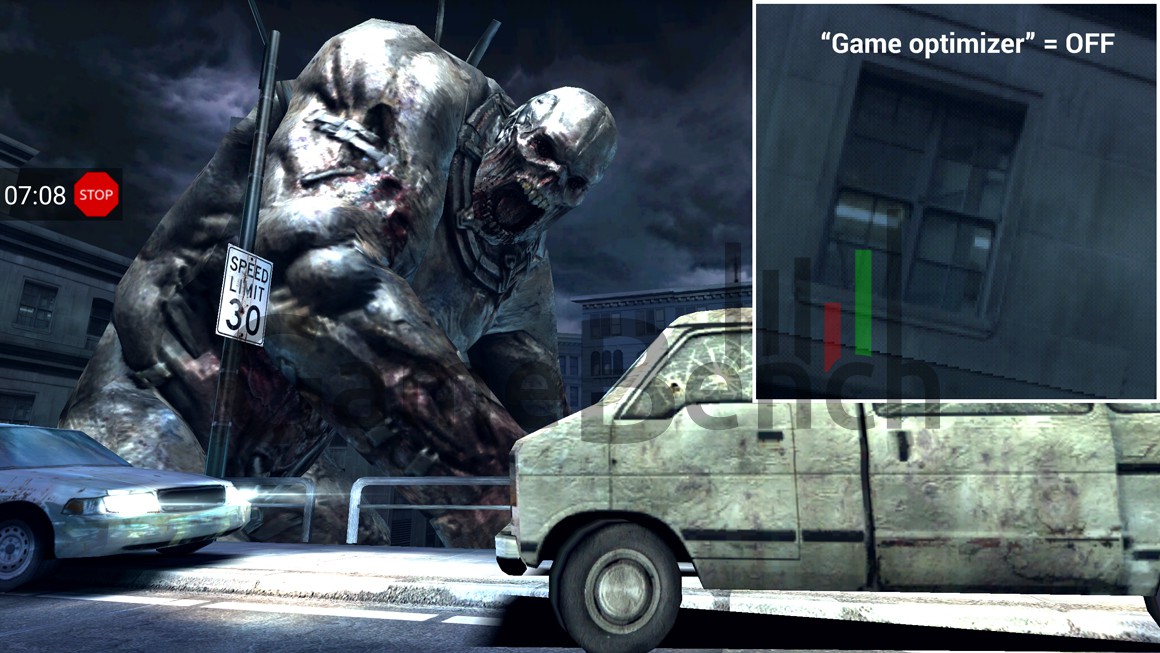 There may be reasons to pick the LG G4 over the Samsung Galaxy S6, but we’ve shown that gaming performance isn’t one of them. The LG G4 ranks not only behind Samsung’s device, but also behind the iPhone 6’s, the HTC One M9 and even the older Nexus 6.

Then again, if you like the LG G4’s other selling points, we wouldn’t necessarily rule the phone out for reasons of performance either. On average, the device achieved a satisfactory 33fps median fps across our basket of ten games -- and those include some of the most computationally and graphically heavy titles currently available. The G4 was only let down by momentary frame rate drops, which were bad but not catastrophic to the gaming experience.

Neither would we favor the HTC One M9 over the LG G4 solely for reasons of performance. The frame rate gap between these two devices probably isn’t big enough to be a deciding factor. In fact, there are some games that play just as well (if not better) on the G4 as on the M9, and this is likely due to the quirks of software optimisation achieved by certain game developers.

Finally, as mentioned right at the start of this report, we need to reserve our full and final judgment on this phone until we can complete a full cross-platform analysis of power efficiency. Our experiences with the device don’t make us especially hopeful about the device’s efficiency, since we’ve observed less-than-amazing drain rates of 25-40 percent regardless of whether the “Game Optimizer” feature is enabled. Nevertheless, it’s possible that least some of the G4’s performance deficit is compensated for by better battery life, and we’re currently building more detailed, cross-platform battery measurements into the GameBench tool in order to find this out. Please stay tuned for more.